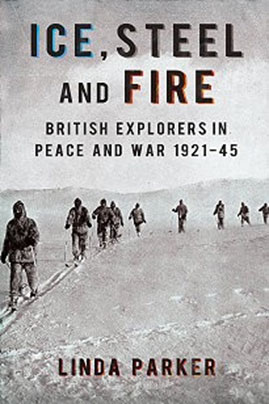 Click here to purchase on Amazon
The generation that reached maturity in the interwar years had grown up in the shadow of the heroic age of Polar exploration and the sacrifices of a generation in the Great War. Their own adventures were to prove as astonishing and heroic as those of a previous generation.
The members of the British Arctic air route expedition to Greenland were to pioneer the weather research methods necessary for Trans-Atlantic Flight. The university expeditions to Spitsbergen led by George Binney in the 1920s and Sandy Glen in the 1930s traversed and surveyed unexplored ground and contributed to developments in polar flight and radar. Other pre-war exploits of these adventurers included a voyage around the world the wrong way, and participation in the British Graham Land Antarctic expedition. Peter Fleming, brother to the creator of James Bond – Ian Fleming – spent the 1930s exploring Brazil, China and Tartary.
The character, skills and endurance obtained in these years set these adventurers and explorers apart as men who were to play a distinguished and heroic role in the Second World War. Their war service took them from the fjords of Norway and Spitsbergen to the jungles of Burma and Malaya and the beaches of Normandy and Italy. They were involved in blockade running, covert operations in Yugoslavia, Corsica and France and took part in major initiatives such as Ian Fleming’s Intelligence gathering force, No 30 Assault unit, and the raid on St Nazaire. Most of these men had known each other before war came in 1939. In some cases they ended up serving alongside one another in wartime. The intertwined stories of these characters in peace and war are examples of how the spirit of adventure shown by men in the interwar years contributed to Britain’s outstanding role in the Second World War.