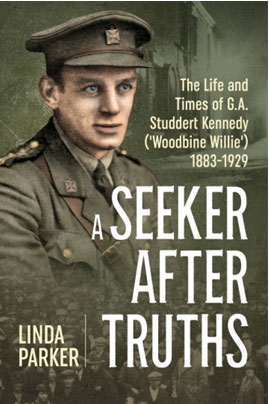 13 May 2018
“A Seeker after Truths” by Linda Parker The Life and Times of G.A. Studdert Kennedy (‘Woodbine Willie’) 1883-1929. Published by Helion & Co Ltd. Price £25.
Linda Parker is an established and authoritative author of World War One chaplains and their influence on the Church between the two World Wars. She has published “Shellshocked Prophets” and “A Fool for Thy Feast” (about ‘Tubby’ Clayton). Now she has launched this book about another brave and famous chaplain, lovingly known by the troops as ‘Woodbine Willie’. For those of us associated with St Martin-in-the-Fields, each of these is a valued source about our own heritage, partly because the main characters were close friends and associates of one of our best known vicars, ‘Dick’ Sheppard; and partly because they were closely involved in the life of St Martin’s and reflected much that this church has stood for since 1914. The St Martin’s Archives has an almost complete collection of the Parish Magazines from 1890 to 2005, when it ceased publication. From 1919 until his death in 1929, ‘Woodbine Willie’ contributed regularly to the magazine and would have been a familiar voice from the pulpit and at meetings of the Industrial Christian Fellowship. When he preached, Dick Sheppard would advise the congregation to arrive early, to get a seat before the church was full. What is more, the troops flocked to hear him during the war. Because we are now more distant from those times, it is more difficult to appreciate his magnetic qualities. But we have the benefit of Linda’s book: we too can know Studdert. On starting to read the book, you soon feel you are living alongside Studdert Kennedy. He was a voracious reader, ever seeking truths, in his early days, and somehow we are there, looking over his shoulder. We learn about his Irish family providing him with a happy, harmonious, loving background. We share in the clerical environment of his father and brothers in the church. Perhaps most importantly, we learn that they were an integral part of the poor areas of town and city in which they lived, so that mixing with “ordinary folk” was a common, everyday experience, which made it quite natural for Studdert to be at home with the men at the front, just as he had been where they lived. As a parish priest, Studdert was familiar with addressing people in the open air. This was valuable experience for his war service. The role of chaplains was certainly not always clearly understood either by the chaplains themselves, or by their military officers! To an extent, they each had to work it out for themselves. Studdert’s conclusion was “Take a box of fags in your haversack and a great deal of love in your heart…go up to them (the troops), joke with them; you can pray with them sometimes, but pray for them always.” He went ‘over the top’ with the men; he would not expect the men to do what he would not! He understood too the grief of mothers who lost sons with no known grave, reflecting on Mary’s “I Know Not Where They Have Lain Him.”
Studdert found too that he had to question some of the beliefs and practises of the church as they applied in the military context. These intense experiences were exacting in many ways and he had to work out what was both practical and made religious sense. Linda guides us through this process with Studdert, so that we too are caught up with the issues and find ourselves striving to “square the circle” or seeking to respond to the challenges to our own inclinations. For example, he came to see God as ‘suffering’ in the trenches with the men, not ‘omnipotent’. Why doesn’t God stop the killing? Well maybe that’s ‘ow it is wi’ God, ‘is sons ‘ave got to be free; Their wills are their own and their lives their own And that’s ‘ow it ‘as to be. Studdert tapped into the many feelings and fears of men in the front line and their families at home. He used the vernacular to express himself and poetry as well as prose. Linda uses Studdert’s own words whenever it is particularly telling to do so.
The story does not end with the war. That was just the beginning of the end! Linda follows Studdert into peacetime and his attempts to put into practice the lessons he has learned from his wartime experiences, such as his conviction that Britain needed to become a fairer, just society. Much of his work with the Industrial Christian Fellowship and his preaching, including St Martin’s, was devoted to this end. On his death, thousands of working class people and ex-servicemen paid their reverent homage to the dead priest; just as they did when Dick Sheppard died some 8 years later. For readers who wish to take their study of ‘Woodbine Willie’ further, there is an excellent list of other sources, both publications and scholars working in the field, to assist them.